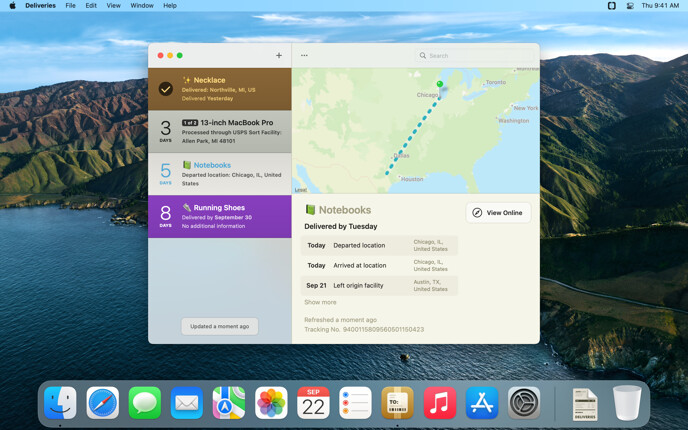 If you have any questions, please see Deliveries for Mac Help.

Deliveries is also available for iOS, in a single app that supports iPhone, iPad, and Apple Watch. You can sync your deliveries between devices with iCloud or our own Junecloud sync. If you create a Junecloud account, you can add new shipments from any web browser.

Deliveries 9 for Mac is a separate app from our previous Mac app. This was a necessary change due to Apple’s requirements for sharing purchases between iOS and Mac. If you currently have Deliveries 3 installed, you’ll want to delete it and download Deliveries 9. If you want to re-download Deliveries 3 for any reason, open the App Store app, click your name in the bottom left corner, and find it in your Purchased list.

This update fixes a crash that could happen when opening the app. We have also fixed an issue on our server caused some purchases to expire unexpectedly. The previous update included enhancements for macOS Monterey, Shortcuts support, and more. For full details, visit juncld.com/e3Cd

This update fixes some common issues with our previous update, which included many other improvements. For full details, visit juncld.com/e3Cd