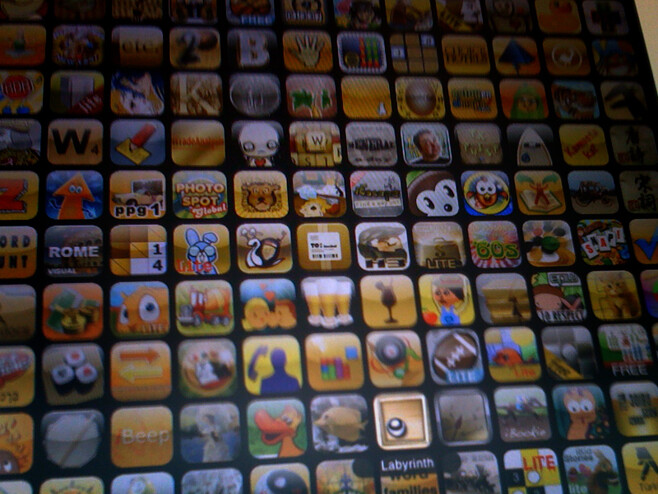 Posted June 16, 2009 by Mike Piontek in Design, Code, Mac, iPhone and iPad.
Above: Apple’s live App Store wall at WWDC. It showed icons of 20,000 iPhone apps, organized by color. When an app was purchased, its icon rippled. It was also a great illustration of what WWDC is like: it’s a huge clusterfuck that makes you feel totally insignificant. But it’s also pretty beautiful and inspiring if you step back and take it all in.

Last week I went to WWDC for the first time, Apple’s Worldwide Developers Conference. It’s a huge event they hold every year at Moscone Center in San Francisco. Developers come from around the world to learn about Mac and iPhone development, meet each other, and get one-on-one assistance from hundreds of Apple engineers.

It was incredibly overwhelming, to be in an unfamiliar city, among thousands of developers (many of whom I look up to), with dozens of sessions, labs, and events to choose from. By the time I felt like I’d gotten the hang of things it was over. It was a fantastic experience though, and I’d recommend it for anyone serious about developing for Apple’s platforms—even if you’re just starting out. I learned quite a bit, met some fantastic people, and got pretty excited about developing for the Mac and iPhone.

I did a lot of reading on other people’s WWDC experiences beforehand, so I felt pretty prepared when I got there. I thought I’d share my own thoughts—hopefully it’ll help someone else next time around.

Things I’m glad I took with me:

Things I didn’t use, but I’d take again:

Things I brought that I’ll leave home next time:

Things I’m glad I did:

I think that sums up most of my thoughts. I had a great time last week, and I can’t wait to see everyone again next year.

This entry has 2 comments.

I can’t believe I didn’t ask you for a card, since they look awesome.

Was great meeting up at WWDC, and a very nice roundup post :)

Really glad we got a chance to meet up (and we used Twitter to plan it).

As a first time attendee also, I have to agree with pretty much everything you said. The water situation was not as scary as advertised :p

Next year I am also definitely getting some cards. We’ll exchange some then!

Business Cards My new business cards finally showed up today, and they look awesome. Same as with…

Welcome to Junecloud! When I first started running my own business full time a few years back, I really…