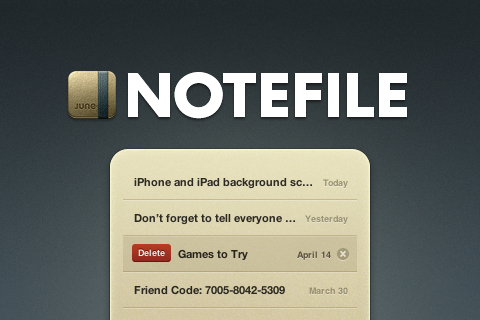 Notefile is a project I’ve had kicking around for a long time. It all started with Dashboard and Apple’s default Stickies widget. The biggest annoyance I’ve had with Stickies is that it doesn’t support undo. Accidentally delete something, and it’s gone.

Eventually Apple added notes to Mail. I thought I’d switch to that, and my frustrations would be gone. But the problem with Mail is that it’s a distraction. Open it up and emails pour in, and I’m reminded of other things I need to do. When I’m working I need to be able to make quick notes without getting distracted. Mail just doesn’t work for this.

Then the iPhone came along, and the iPad, and now I want something that can sync with these devices, so my notes are always with me. There are a huge number of options for this, aside from the built-in Notes.

There’s an app out there that solves each problem, but I never found one app that solved them all. I just wanted a simple, refined notes widget for Dashboard that would also work with all my iOS devices. Easy to get to from anywhere, and always in sync. Undo support in Dashboard, a simple font, an attractive design, and not a lot else.

Syncing works just like Delivery Status. You can use the same account if you have one already. There’s a new site at junecloud.com/sync where you can edit your note and deliveries online. (You can also restore deleted notes there if you ever need to.)

So, want to try it out? You can download a release candidate of the Mac widget now. Notefile will also be a universal app for iPhone, iPad, and iPod touch—we’ll get it in the App Store as soon as we’re done testing it.

This entry has 30 comments.

I’m sure you’ve heard of Simplenote, but you might not have heard of dashnote, which is a dashboard client for simplenote: dashnote.resen.co/ It also has undo support.

I’ll check out Notefile once the iOS app becomes available.

You’re the man, Mike! Can’t wait to try it out!

This looks really cool. The main thing I don’t like about Simplenote is having to go out to the browser to retrieve my notes on the Mac. The Dashboard works better for me.

If the iPhone/iPad apps are anywhere near as good as your Delivery Status apps, I think I may be sold on this.

One thing I’d like to see is automatic URL recognition in the Dashboard widget. It would be nice if links could just be clicked to launch in the default browser.

nice and clean widget.
I still don’t get how I would sync the :( with my iphone….

I use Simplenote for a couple of years now. In fact I did the dutch localization. In the past I used Dashnote to write notes on my Mac and have them synced with Simplenote. However for me using Widgets is more awkward than using Apps so I stopped using Dashnote and started with Nottingham.

Notefile could be a very cool option for syncing notes but for me an desktop App would be indispensable. Dropbox and .txt file support would be great too :)

Joe: That’s high on the to do list. It turned out to be a bit more complicated than I originally expected so it was left out of the initial release.

Johannes: I’m not sure what you mean? The iPhone app will sync with the widget, in the same way Delivery Status syncs. You’ll also be able to edit your notes from any web browser.

mhoutman: A full Mac app is a possibility if there’s enough interest. Dropbox syncing is unlikely just because there are already so many other options for that.

Looks really nice.
It would be great if you could add the possibility to add sketches drawn on the touchscreen of iPad/iPhone or a grafictablet.

I love the concept but I never liked the UI of SimpleNote on my iPhone. I can’t wait till the iPhone client is released so I can take it for a spin.

Oh and I would love a regular desktop app with quick add feature.

This looks amazing. I too would love a desktop client, but it wouldn’t be required…

This looks pretty darn nice, but I have to say it’ll be tough to steal me away from using PlainText. I’m sure you won’t release a desktop app for Windows so this limits your appeal to the other 85% of the world. If you release a Windows app though I’ll gladly consider this.

that’s quite awesome i think. a nice solution for what i searched a long time ago.especially with a nice look and feel! …the iphone app will replace my notes apple app, i guess!

Will it be possible to run a self-hosted sync server?

If not, notesync willy be out of the question f

Ola: Currently there are no plans for a self-hosted sync server.

Cannot wait for this to be available on iOS. I’m currently using the standard notes on both iphone & ipad because I like their simplicity, however I’d like the option to bold or italic the font. Will this be a feature?

This thing is sexy! Looks really good. My only gripe so far: I wish that when you close a note, it would be highlighted (in the list) for a second so you can see which note you just left. I find that sort of useful.

Jason: Not in the initial release. We want to keep it very simple, but we might consider some simple formatting options in the future if there are a lot of requests for it.

Bryan: That’s a good idea, it should be fairly easy to add that in the future.

I’m ecstatic you’re taking this up. While Simplenote/PlainText are solid options on iOS, nothing really compares on the Mac.

The UI looks fantastic, and I’m hoping development is rolling along on the iOS side of things. Any chance we can get a small update on how that’s going? :)

I’ll be recommending Notefile to people I know once the iOS apps become available. It has just the right amount of minimalism and functionality.

Looking forward to what’s coming next. Keep up the great work on all your software,

Would it be possible to select different font options in the future? I’m not particularly fond of the plain text. I actually like the regular Notes Widget text (probably gotten used to it). I know some people don’t like it, so maybe a setting to change which font?

Mike,
Love DeliveryStatus, and am liking the looks of NoteFile!
Without getting too complicated, is there a way to make the “enter” key close the note back to the list? Besides “enter” not making much sense as a carriage return, it would be nice not to have to mouse down to the bottom to close a note.
Also, maybe “command-N” for a new note?

Just some ideas.
Thanks
-Dave

@Dave - I use the enter key for new lines, but I do like the suggestion of not having to use the mouse. Maybe something else? maybe even the ability to set shortcuts, like arrow keys to scroll through list of notes, enter to select, “n” for new note?

You know what would rock my socks in a future version? Markdown. I don’t know how easy/difficult that is to implement, but I would think it would be simpler than .rtf for formatting and the like.

Notefile sure looks like it could replace Simplenote as my new fave notetaker. Just curious about one thing: can Notefile import my Simplenotes? Don’t wanna retype ‘em….
As for the Mac app: that’s a +1 here. Would love a Menu Extra version :)

Will notefile (and delivery status) support syncing with iCloud (instead of junecloud) when iOS 5 is released? I love the idea of keeping all my syncing in one place. Anytime I need to setup the widgets or apps on a new device I forget which email/password I used…

Ton: There’s no importing, but of course you can copy and paste rather than retype.

Justin: We’re very interested in iCloud, and we hope to make it an option in Notefile and Delivery Status. Right now we’re still learning about how it all works though, especially with Dashboard widgets. There are also some potential downsides to iCloud syncing—for example you wouldn’t be able to edit notes or deliveries on our web site. Keep an eye on the site though, I’m sure we’ll have more to share when the time comes.

On the dashboard app - It would be useful if a double mouse click on a note would bring you back to the list of notes.

Also, a bold option for text would be good.

Paul: Double-clicking is a standard text selection shortcut (to select a single word) so that’s unlikely. I’ve been thinking a lot about shortcuts though—I think command-return will be a good way to get back to the list quickly.

We’re considering some simple formatting options, especially since iOS 5 seems to offer a way to add this fairly easily.

Does, or do you plan for, Notefile to have a password protection feature?

Marcus: We don’t have any plans for a password protection option right now. We recommend using the passcode lock on the device itself, in Settings > General > Passcode Lock.

An update on our apps It’s been a while since we shared an update on everything we’re working on. With iOS 15…

Upcoming changes to Deliveries Deliveries 9.2 will be available soon, and we wanted to let you know about some changes…

Deliveries 9 is Preparing to Ship We’ve been hard at work on a big update to Deliveries, and we’re excited to announce…