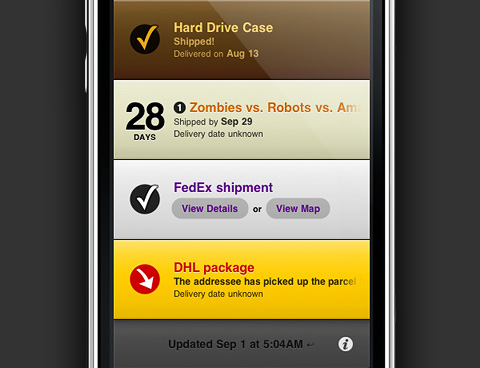 Delivery Status touch has been submitted to Apple!

Delivery Status touch (for iPhone and iPod touch) is complete—I sent it off to Apple last night. Hopefully it will appear in the App Store next week, but don’t be surprised if it takes longer. It will be available initially for an introductory price of $1.99, so I recommend grabbing it quickly if you’re interested! Keep an eye on the site, as I’ll be posting an update when it’s available.

This initial release is just the beginning. Assuming it sells well, I already have a big list of features I’d like to add in the future. There are a couple of other package trackers in the App Store already—ours won’t be the first and it looks like it won’t be the cheapest. I do aim to make it the best though, and from what I’ve seen we have a good head start. I hope you’ll consider supporting us!

In the meantime, you can download Delivery Status 4.4 for your Mac right now. Along with various fixes and enhancements, this update includes a feature that will let you send deliveries to Delivery Status touch, on your iPhone or iPod touch. Just flip the widget over and click the new arrow button in the bottom-left corner.

Just to clarify: while you can send deliveries to your iPhone or iPod touch now, Delivery Status touch is required to open them. I decided to release the widget update in advance so you can have it ready once the app is available in the App Store. Sorry for any confusion!

Updated on September 19th: Delivery Status touch has been approved for sale, and should be available in the App Store very soon!

Updated again: Delivery Status touch is now available in the App Store! Thanks everyone for your support, I really appreciate it. If you decide to buy the app, please take a moment to write a review!

This entry has 30 comments.

Sorry about the problem with the comments not working. It’s fixed now!

This is an awesome app and is worth way more than 2 bucks.

THANK YOU THANK YOU THANK YOU! I’ve been using Delivery Status ever since I switched to Mac, and I’m so excited to get it on my iPhone! Also, the idea of sending it from the computer to the iPhone is very smart, since it’s impossible to add tracking numbers easily without copy&paste. All in all, great job, looking forward to paying my $1.99!

Grr.. Can’t find it on the norwegian AppStore! I’ve been a faithful user of the widget for a year now, and buying this app would be an excellent way to sponsor further development, but I can’t find it, so I can’t buy it…

Ok, failed to notice the date on this post… I doubt anything gets through the approval-process in two days now that everyone and their sister is developing iPhone-apps.. ;)

I have been waited this really cool app for a long long time.
I will buy it !

“There are a couple of other package trackers in the App Store already” - yeah, and they suck! Well, -it- sucks, it’s the same app with or without adds. I am convinced yours will work, look and perform miles better.

By the way I just emailed you about a bug in the confirmation email you receive after clicking the ‘Send to my iPhone’ button the first time, there is something missing after the email address, there is a = sign and the confirmation code.

Congrads on having it finished!!

I am sorry, Mike, as much as love your widget I do not like the icon for the iPhone version.

There is very little connection between the icon and the purpose of the application, IMO, although there is no doubt that use of the limited space of the icon from a design point of view is quite good!

This is so great! I’ve been waiting for this since the beginning of App Store!
Thanks Mike!

I cant’ wait! Thanks for doing this app Mike. I’ve been addicted to delivery status for some time now, and have been anxiously awaiting the release of DST. I know I’ll be at the head of the line when it appears on the app store. Cheers!

Outstanding - I had been thinking how cool it would be to have Delivery status available on my iPhone - the “syncing” via email will be super slick!

Greatly looking forward to it man! The current package trackers in the app store really do suck badly. Only complaints I have are that I’ll miss having the carriers logo showing (although I understand the space constraints) and that I’m really not a big fan of the new truck front icon. Just takes me too long to even recognize what it is and it looks kind of silly.

Small objections aside, thanks for the hard work and I’ll keep my eyes out for it in the app store!

delivery status is probably my favorite widget. the other package trackers in the app store are crap and not even close to being as useful and gorgeous as this will be. i will gladly pay 1.99 for this..

$2 is more than I’d usually pay for an iPhone app of this utility, BUT as a dedicated user of the free widget, I will gladly pay it to support your efforts. Looking forward to the app release.

My first reaction was “Hey, that looks like a nice solution to tracking packages on the iPhone. Wait a minute, it integrates with the dashboard widget I’ve been using for two years? Where’s the ‘Buy’ button?”

I got a your app.

Bought the app, it’s great and works as promised. One feature I’d love to see is that when you click view details, instead of quitting and opening the page in safai, if it would instead show the page in a webkit viewer inside the app. i’ve seen a few apps with this capability, so I hope it is trivial to add the mobile safari framework to your app. Thanks!

I already have a bunch of features I’d like to add in future versions. Showing the full details directly in the app is very high on that list!

Was waiting for this, well done! It looks VERY polished, though I have some ideas.

I can’t wait to see what you are gonna add. Congrats!

Who did the icon for it? It’s a bit different from other iPhone apps’ icons, but I love it!

Bought it to support your amazing efforts. Would love to see details in app and have a way to see the info that fades out to the right. Well done.

Tim: I designed the icon myself! Here’s a write-up on the design process if you’re interested.

Thanks again for the feedback everyone. Even if I don’t respond directly to all of it, we do read and consider all your comments and emails. Keep them coming!

I bought this app simply because I’ve been benefiting from your dashboard widget ever since I switched. It’s not only well-designed but highly useful and one of the widgets that make the dashboard useful for what it does.

I bought the app knowing I didn’t have any packages coming or going for quite some time because I wanted to say “thank you” for all the years of hard work. That and the carrot/stick “introductory price”. I’m almost tempted to order something from Amazon just to see how it works.

Great Job Mike! Any chance we can get the carrier logos added ?

I love this app! Can I make recommendations for improvements?

1) I would love it even better if you could have the app save the delivery status “as of” and have it update in the background while you browse through the list. I run EDGE which is slow, so I’d like to be able to check or glance at my long list of shipments without a loooooong wait.

2) It would be great if you could tap a shipment like an email — or an arrow at the right side — to access more information (tracking number, area to edit item information or notes).

3) A function that would allow users to rearrange or delete shipments like in Alarms, On-the-Go playlists, or email. Like an “Edit” button that allows for dragging and delete functions or something.

Long-time user of the desktop widget, just saw that the iPhone widget was available, bought it immediately.

It’s great for me as-is, just to keep tabs on my deliveries (which, with the holidays coming up, are now starting to really pile up!), and I’m delighted to support your development efforts. How could I not? :-)

Thanks so much for a great desktop widget, and now for a great iPhone app! Excellent work!

I’m loving the new iPhone version, but I do miss the carrier logos from the widget version. Any chance of them appearing in Delivery Status touch?

Stopped working and tracking some companies like DPD :-( after update

David, please check our support pages or send us an email with some more details. Are you having problems with other shipping services or just DPD? If you don’t mind sharing your tracking number so we can take a look, that’s especially helpful.

Deliveries 9 is Preparing to Ship We’ve been hard at work on a big update to Deliveries, and we’re excited to announce…

Deliveries: now with dark mode and support for the latest devices This week we released Deliveries 3.1 for Mac, with support for macOS Mojave’s new dark…